The little yellow booklet of the Altermodern Exhibition Journeys

In a previous post I was saying how in our last conference, as we tried using the concept of the Altermodern to frame our discussions (in anthropology and in education), Anna and myself found that people responded really well about the altermodern.


Yesterday a colleague of ours called home and asked if Anna would give her paper again (on exclusion and education)...and not only that..they want to hear again about the Altermodern, so there we are...back to the leaflet again.

So we have found ourselves going to conferences with the little yellow leaflet (basically we explain B's ideas and his notes from the Tate's website and publications, and then we read one or two paragraphs from the little yellow book, enough to give a sense of flavour and to use the original sources). We then pass the yellow book around, and let people read and think about it...-don't you think that despite my issues with the manifesto and how to extend its postmodern ideas into a fuller altermodern meaning of it I do not like or use the original ideas! I do, actually).


So, we have realised that our yellow booklet is now quite travelled and old (and a bit torn on the edges), it has travelled all around all the exhibitions of the Tate britain, including toilets and caffe, it has lived in our handbag and between the pages of our notebooks. It sits in our desk, at home. It has travelled up to Manchester, and a bit of Oxford, and even touched by my sister, and that means its influence is gone to Barcelona with her, too. It will travel to York, to Anna's next conference, and it will travel to Belfast next year to the ethnographic conference on Interviewing where I hope to use it to re-frame ideas of time and movement in doing anthropological research

In honour of the little yellow booklet and the inspiration on maps, I did my version of the journeys of our little yellow altermodern booklet (from the tate to the undergound, home and UK and abroad)..... 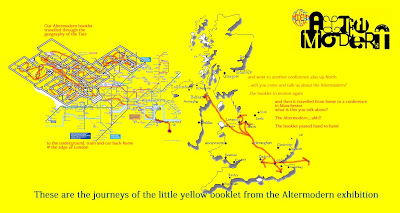